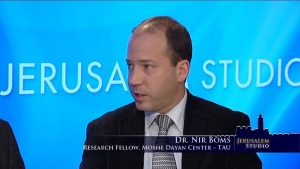 Dr. Boms is a research fellow at the Moshe Dayan Center at Tel Aviv University and coordinator of the TAU Workshop on Israel and the Middle East. He is also a fellow at the International Center for Counter Terrorism in Hertzliya.  Dr. Boms is a member of the board of the Israeli Council of Foreign Relations and the  Institute for Monitoring Peace and Cultural Tolerance in Schools and the Co-Founder of CyberDissidents.org, a network of bloggers from the Middle East that focuses on freedom of expression and the promotion of dialogue in the region. In 2012 he co-founded the Tiyul-Rihla project, a bi-national educational initiative bringing Israelis and Palestinians together to travel and learn the history and identity of each other.

Prior to his return to Israel in 2004, he served as the Vice President of the Washington based Foundation for the Defense of Democracies (FDD).

Prior to his tenure at FDD, Dr. Boms was the Academic Affairs Officer at  Israel’s Embassy in Washington, DC.

Dr. Boms’s articles have appeared in Ynet , Ha’aretz, The Wall Street Journal, Le Monde Diplomatiq,  Die Welt (Germany) , The Washington Times, Iran Times International,  Today Zaman (Turkey), The Jerusalem Post, The National Review, The Asia Times, The National Interests,  and Israeli Journal of Foreign Affairs and Baghdad Times among others. He also participated in the writing of “Copts in Egypt, A Christian Minority Under Siege” (G2W-Verlag, 2006) and “The Long March to the West” (Valentine Mitchell, 2007). His recent book, Expat-ing Democracy (Peter Lang, 2016) deals with the influence of Expat communities on democracy discourse in the Middle East. His upcoming book,  “The Syrian War: Between Justice and Political Reality” will be published by Cambridge university Press (2020).

Dr. Boms has extensive educational and outreach experience working in Israel, the United States and Europe. During the course of his career, he has taught and lectured in Australia, Bulgaria, England, Hong Kong, Hungary, Poland, Turkey, South Africa, Brazil,  Morocco, the United States, the United Nations and its Human Rights Council, on issues relating to the Middle East, Terrorism and Democratization. He is fluent in Hebrew, English and Arabic.

Dr. Boms served in the Israeli Defense Forces as a communications officer and holds the rank of Captain (Res).