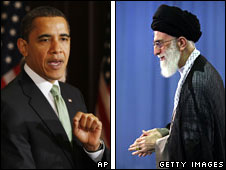 A day after mid-term election in which American voters appeared to have challenged the President and its leadership, the Wall Street Journal broke the news that President Obama sent a secret letter to Ayatollah Khamenei, Islamic Regime’s supreme leader. This was apparently the fourth letter in a series of secret exchanges Obama has had with Khamenei since taking office.

According to WSJ, President Obama secretly wrote to Iran’s Supreme Leader last month describing a “shared interest in fighting Islamic State militants in Iraq and Syria.” Although it took another week for Iran to officially acknowledge the letter, Khamenei hinted of the exchange in his Nov. 3 speech on the anniversary of the Iranian revolution: “The new U.S. President made some beautiful comments. He also repeatedly asked us in writing and orally to turn a new page and help him change the present situation. He asked us to cooperate with him to solve global issues.”

But here is more about how Iran sees this vision of cooperation. Upon his release from the well-publicized prostate operation last month, Khamenei gave a rare interview to State TV describing the “absurd, hollow and biased” remarks made by U.S. officials regarding the formation of a so-called international coalition to battle the ISIL terrorist group. Apparently, Iran is not a great believer in “international intervention.” Perhaps because it feels that “local intervention” works much better. And this was hinted in another  statement by Khamenei who noted that  that if Americans want to be able to do what they want in Pakistan, Iraq and Syria, they “should know that if they act in such way, they will face the same problems they had been facing over the past 10 years in Iraq.”

Dexter Filkins, who did extensive research on Iran’s role in Iraq, provides some context. Ryan Crocker, U.S. Ambassador in Iraq at the time of second Gulf War, admits to Flinks that, “As the American occupation faltered, Suleimani [the head if the Quds force of Islamic Regime] began an aggressive campaign of sabotage.”

Filkins, notes that as fear of an American invasion began to recede, the Iranians became more aggressive, using tactics of sectarian violence, road bombs, bribe, intimidation and assassinations in order to solidify their position and weaken the Americans in Iraq.

By 2010, Iran began a well-orchestrated campaign of bribery and intimidation to prevent Ayad Alawii – a pro-west secular politician who had won the majority seat in the parliament – to form a government. Instead of Alawii, Iran brokered a deal that made Nuri al-Maliki, a relatively unknown fanatic and highly sectarian Shiite, the new Prime Minister of Iraq.

Maleki, supported and encouraged by Iran, implemented a highly sectarian policy alienating the Sunni Arab population of Iraq. Sectarian politics plays a role in Syria as well where Iran continues to support the Alawite minority along with the regime of Bashar Al-Assad, who has long crossed every red line using conventional and non-conventional weapons against his citizens. Iran’s action, in conjunction with Obama’s inaction and refusal to support moderate forces in Syria, prolonged the bloody civil war and paved the way for rapid expansion of radicals which eventually gave rise to ISIL first in Syria and then in Iraq.  It  is astonishing to think that following years of frustrating American efforts in the region that were often blocked by Iran or its proxies, President Obama believes that he can still persuade Khamenei to cooperate with America on the fight against the Islamic State.

Trita Parsi, President of NIAC – a controversial lobbying group who appears to have very strong ties with the Islamist regime – commented on these exchanges in Foreign Policy magazine. In his piece, entitled, “Pen-palling with the Ayatollah,” he notes that “only ideologues and the ignorant don’t understand that Obama’s letter to Khamenei is just pragmatic politics.” America certainly has an interest in the region and defeating The Islamic State in Iraq and Syria is a crucial one. However, enlisting the “help” of Ayatollahs is a dangerous proposition. That policy route is likely to fuel the sectarian hatred, anger and alienate allies. It will also, most importantly, expand the sphere of influence of the Ayatollahs who have proven their hostility towards America over the past 35 years. An ISIS deal will also strengthen the Ayatollah’s hands in crucial nuclear negotiations, a danger far greater than a regional militia. Exchanging letters between world leaders is indeed pragmatic politics and a fact of life – but so is the Ayatollah’s hostility towards America. The choice of pragmatic ignorance – or worse – an ideological one, is both dangerous and wrong. A much more real pragmatism is very much due.

Dr. Nir Boms is a co-founder of CyberDissidensts.org. Shayan Arya is an Iran expert and a member of the Constitutionalist Party of Iran (Liberal Democrat).