Russian President Vladimir Putin announced during a press conference in Moscow that it was time for Syrians who fled their country to return home – and partake in its rebuilding.
To discuss the viability of this call, I’m join here in the studio by;
1. Dr. Eran Lerman – Vice President of the Jerusalem Institute for strategic studies and a lecturer at Shalem College
2. Dr. Nir Boms – Research fellow, Moshe Dayan center at Tel Aviv University
3. Dr. Eldad Pardo, Research Director – Impact SE & Lecturer on Iran Hebrew University Jerusalem

The fighting in the North-western district of Idlib may turn out to be the last big battle in the Syrian civil war. In its determination to gain a final victory, the Assad regime has been accused of readying a chemical weapon strike, and there is an American commitment to punish Damascus if that happens. 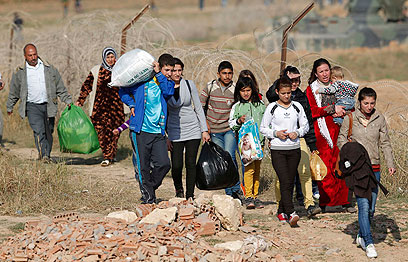 In mid-June, Syrian and pro-regime forces began what they see as a decisive (and long overdue) campaign in southern Syria aimed at eliminating the rebel resistance within the southern “de-escalation” zone along the Israeli and Jordanian borders. The military campaign involved substantial Syria government forces advised and assisted by Russian military and air force personnel.

The regime and its allies have demonstrated superior military power, which has already “convinced” over 30 towns to return to regime control. Some rebel-controlled cities – Busra al-Sham, the surrounding villages to its south, and al-Jieza – agreed to comply with “reconciliation agreements,” requiring the surrender of arms and removal of key rebel leaders. In contrast to previous agreements, large scale evacuations of the area are to be avoided. However, rebels who contest the deal will be evacuated to the rebel stronghold around Idlib in northeastern Syria, which remains under Turkish supervision. Following the regime and its allies’ conquest of the majority of the northeastern part of the former “reconciliation zone” in Derʿa Province, talks will focus on the remaining rebel territory in Derʿa’s western countryside and the southern half of the city. In the meantime, according to UN estimates, the battles have pushed more than 320,000 people out of their homes, mainly towards the Israeli and Jordanian borders.[1] END_OF_DOCUMENT_TOKEN_TO_BE_REPLACED