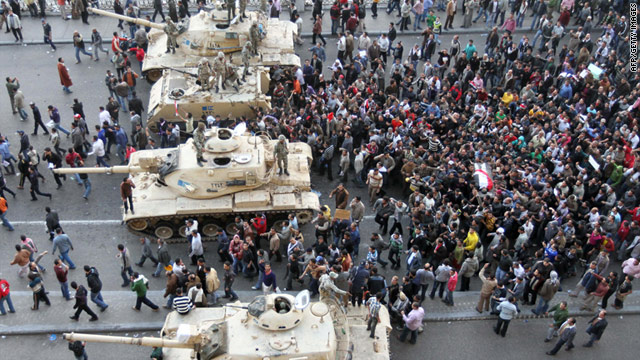 The demonstrations in Tunisia and Egypt caught most of us by surprise. Revolutions often do. Sir Anthony Parsons, the British ambassador in Tehran, declared in 1978 that “there has been little or no evidence of unrest among the urban poor.” Shortly after, Iranians poured into the streets and deposed the Shah.

A decade later, the U.S. was shocked by the sudden collapse of the Soviet Union, another revolution from within. In October 2000, several hundred thousand people protested against Slobodan Milosevic, who was arrested by Serbian police six months later and eventually prosecuted for war crimes. In 2003, Georgian president Eduard Shevardnadze attempted to steal an election, and the people prevented him from opening a new session of parliament in what came to be known as the Rose Revolution. The Ukrainian Orange Revolution followed a year later, with half a million people marching to protest election fraud, corruption, and repression.

But not all marches end successfully. In 1989, the People’s Republic of China had little tolerance for the 100,000 demonstrators gathered in Tiananmen Square following the funeral of Hu Yaobang, a popular Communist leader who believed in political and economic reforms. Lebanon is still held hostage despite its million-man freedom march in 2005. Iran has learned its lesson: Repeated attempts at revolution — including that of the students in 1999 and the Green Movement of 2009 — have been crushed with high casualties. In Egypt, Syria, Libya, and even Morocco, popular protests have been quickly crushed.

While every revolution is a unique event, a few lessons may be gleaned from these examples. First, the desire for freedom survives despite threats, intimidation, and repression. Second, a “freedom march” is not about democracy but about something much more basic: the will to be heard and to have ownership of one’s own life. Aspirations alone cannot ignite a revolution, of course. It requires mobilization, leadership, courage, and willingness to sacrifice — often fueled by a certain level of hatred of the regime.

Tunisia is no exception to these rules. Its population is educated yet unemployed. Its corrupt leadership, with its lavish lifestyle, did not escape the eyes of the people. A dissonance developed in which the average Tunisian was permitted to experience the “outside world” while living in a repressive regime that would not tolerate dissenting voices. And it had a core of opposition leadership, including bloggers such as Azyz Amamy and Sofian Bel Hak, who utilized the only communication tool available to the opposition: the Internet.

In the West, we often dismiss “virtual activism” as an affectation of couch potatoes who enjoy adding “Likes” to their social-network pages. In places like Tunisia, that “Like” may put you in prison — the “virtual” is a little more real. In Tunisia, Georgia, Ukraine, Iran, and elsewhere, it was the Internet that helped the march of freedom to proceed and be broadcast, thus generating the international fuel needed for its success.

The ripple effect is already being felt. To be on the safe side, Syria increased its fuel subsidy to 72 percent. Jordan decreased the prices of fuel and other commodities. Yemen cut its income tax by 50 percent. These regimes are learning a critical lesson: The people must be taken into consideration.

Tunisia, the first success of such a freedom march in an Arab country, proves that, under certain circumstances, the voice of the people can be heard even in that part of the world. For the ruling elites of the region, this is a source for concern that might lead them to take actions aimed at weakening the success of a “people’s revolution.”

Achieving freedom is neither safe nor easy. For every success there are many bloody failures. Unfortunately, recent data (Tunisia excluded) point to a global decline in political freedom. Nevertheless, the march to freedom continues and occasionally provides a revolutionary surprise. If we believe in freedom, we must do more to fight censorship, making sure that the people’s voices — virtual or otherwise — will be clearly heard, especially by those who strive to silence them.

— Nir Boms is a board member of CyberDissidents.org. Elliot Chodoff is a political and military analyst for MidEast: On Target (www.me-ontarget.com).

One thought on “The Tunisian Revolution: Virtual Voices Made a Real Difference”